A HELPING HAND – Now solo kayak record holder Stephen Mooney of
Whitehorse is helped out of his kayak by fellow Yukoner tim Hodgson
at the finish line in Dawson City Friday night. Hodgson and his canoe
partner Chris Gerwing of Winnipeg finished just five seconds ahead of
Mooney. The “photo finish” for second and third place was filmed by
the BBC Challenge crew (background). © Photo Whitehorse Star

First place was already locked up, but it was a sprint to the finish for second place in the 2004 Yukon River Quest.

Whitehorse’s Stephen Mooney, traveling in a solo kayak under team name Promithian, faced off against team Gerwing/Hodgson, which was made up up Whitehorse’s Tim Hodgson and Chris Gerwing from Winnipeg. The three men had been travelling down the Yukon River together since about 12 hours into the race and none of them was about to give up any ground.

“It was a good race for spectators,” said Mooney in an interview this morning. “We just wanted to put on a good show for the spectators. I thought the chances of me passing them were slim, but I wasn’t going to just give it to them.”

When the sprint was over, Gerwing and Hodgson claimed second position by just five seconds and Mooney had to settle for third, although he insisted there wasn’t much disappointment.

“I had estimated about 55 hours and I beat that, so I was pretty happy,” said Mooney, who checked into Dawson with a time of 47 hours, 58 minutes – a new record in the men’s solo kayak category by about 56 minutes. “My goals were top ten and 55 hours. I had no idea I was
on a new record pace.”

The previous record in the men’s solo kayak was 48 hours, 54 minutes. Mooney called this year’s River Quest a “tough race” for him, with small hallucinations from being sleep-deprived. He said traveling with Gerwing and Hodgson, as well as fourth-place finisher All North/Waterstone Frontec – a tandem canoe team comprised of Whitehorse residents Francis Roy and Jean-Francois Latour – helped everyone push each other and reduced all of their times.

In fact, there were five new time records set in this year’s River Quest.

In the women’s tandem canoe category, Amy Byers and Danise Kimball of California broke their previous record by an incredible 17 hours, with a time of 67 hours and four minutes. And in mixed tandem kayak action, England’s Jason Merron and Charmian Gradwell of the BBC
(British Broadcasting Corporation) Challenge team set a record of 51 hours and 13 minutes.

The winning team of Michigan’s Steve Landick and Bruce Barton did not set a new course record (they were off by 18 minutes) but beat the stock tandem canoe record by 43 minutes.

While Mooney acknowledged the river speed was faster this year than last, he’s not sure it was the fastest speed in the event’s history.

“I think it was the temperature,” he stated. “The temperature really played to my advantage because I didn’t have to change clothes. I didn’t put a piece of clothing on all race.

“Actually, I changed my shirt at Kirkman Creek (the second checkpoint) because it was wet, but I didn’t change another piece.”

The Whitehorse resident did, however, suffer a couple of mishaps during the race, starting about two hours into it when his seat broke. He had to fix it as best he could until he made it into Carmacks.

“In Kirkman Creek, my food got eaten by a dog when I was sleeping,” he added.

Luckily for Mooney, there was some extra food stored in a front compartment that the dog didn’t get at. As for the water, he drank from the Yukon River the whole way – untreated.

“I didn’t treat it because the competition wouldn’t allow it,” he said. “They took advantage of me. Every time I took my paddle out to get food … they would see that and take advantage of that and just hammer. So I would have to be so quick.”

Mooney said through most of the race, it was just friendly competition between the two teams. But towards the end, he said, they started to get a bit more serious.

Both teams had to paddle through a lot of smoke due to fires on the way to Dawson, especially near Kirkman Creek.

“I had little hallucinations with the smoke coming out of Kirkman,” said Mooney. “It was just so wide and smokey, I thought I was on the ocean. The canoe in front of me kept appearing and disappearing. You just couldn’t see anything, The smoke was just unreal.”

Although it affected his mind and sight somewhat, Mooney doesn’t believe the smoke really slowed him down, although he has some ideas on what did.

“In hindsight, I know where I could have shaved some time,” he said.

“It was my friend’s boat … it’s not the fastest boat out there that I could have used.”

For a few of the teams, time was lost due to a dump. Whitehorse’s Linda Bourassa (Grandma Bun Bun) was traveling with Jim Jager and Edward Jager (Sanguine) of Anchorage, Alaska, and Utah respectively, about 30 miles away from Carmacks. The two men had just finished taping up Bourassa’s back, which was hurting from a rash, after the original moleskin had come off due to the water.

They started paddling down the river side by side when they hit some white water. Bourassa saw a huge boil in the river – which she described as the biggest boil she had ever seen – and then another one started under her and joined the boil she had been looking at, which created a whirlpool. She didn’t have time to brace herself before her kayak flipped.

The Whitehorse resident managed to get out of her kayak but remained attached to it because her water tube was connected to her spray skirt and she couldn’t break free from it. Her head was just barely above the water.

“I was trying to hang onto my kayak,” she said later in an interview.

“I lost my paddle. I yanked on my water tube, which loosened and allowed me to get my head out of the water.”

At that point, the Jager’s hollered they were coming over and told Bourassa not to panic. She started swimming towards shore with her kayak while the men went down river until they found an eddy. They then held onto a small tree and tried to grab the kayak while Bourassa got in. But the kayak tipped and Bourassa fell out. At the same time, the tree branch broke and the Jager’s started to head down river. Bourassa managed to grab onto their rudder and still maintain
her hold on the kayak.

“With their help, I got back in, got turned around again and started down the river,” she said.

The two men found her sponge and map later down the river, so the only thing she ended up losing was her hat.

“They kept telling me, ‘Be calm, don’t panic. You’re safe and we’ve got you,’ which helped keep me calm,” she said. “It really helped.”

Bourassa also said the scary event cooled her off because it was so hot, and energized her.
“When I got to Carmacks, I felt great.”

While Bourassa kept paddling after Carmacks and finished the race, 15 teams would scratch at the first checkpoint, and another team scratched soon after. 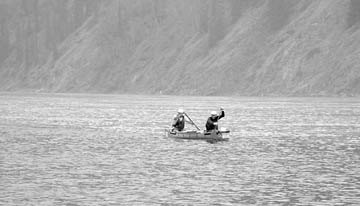 HERE WE COME – Steve Landick and Bruce Barton of Michigan paddle into
smoky Dawson City on Friday night to win the sixth annual Yukon River
Quest. The pair finished with an elapsed time of 44 hours, 27
minutes, just 18 minutes off the course record held by Landick and
another partner from the 2001 race. © Photo Whitehorse Star

This news article was published in the